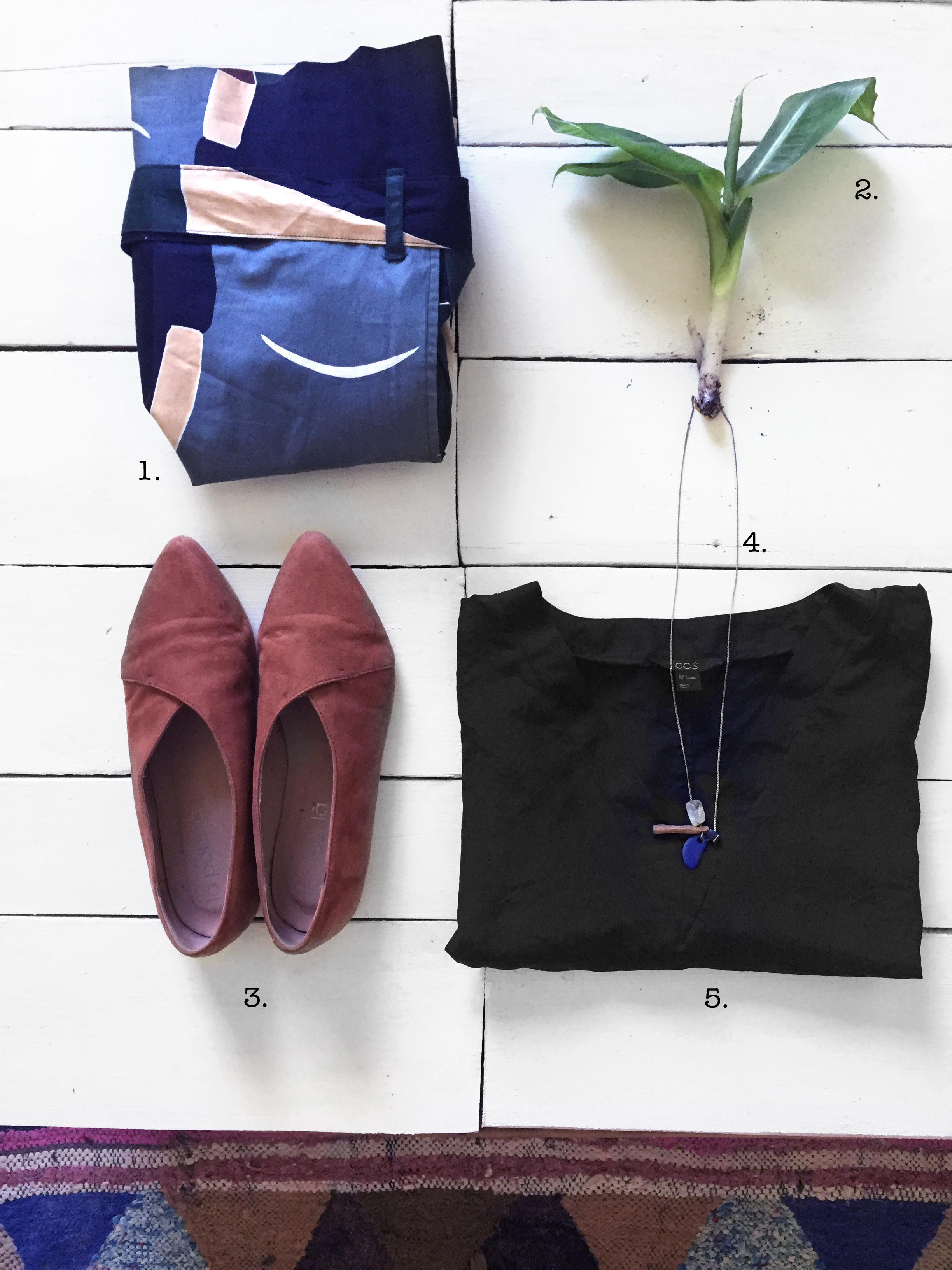 1. Crossover skirt by Kowtow - ethically and sustainably made from seed to garment.
2. Our banana tree got two babies so I separated them from the mother plant. By the way: Did you know that the banana industry relies on just one kind of banana and that the original banana died out because of the effects of monoculture and that our every day banana faces the same danger? If not watch this episode of VICE.
3. Isabel Marant necklace found at ave
4. Amazing comfy and light  brown shoes by là pour là that perfectly fit either to a classy or casual outfit
5. black v-neck silk top by cos 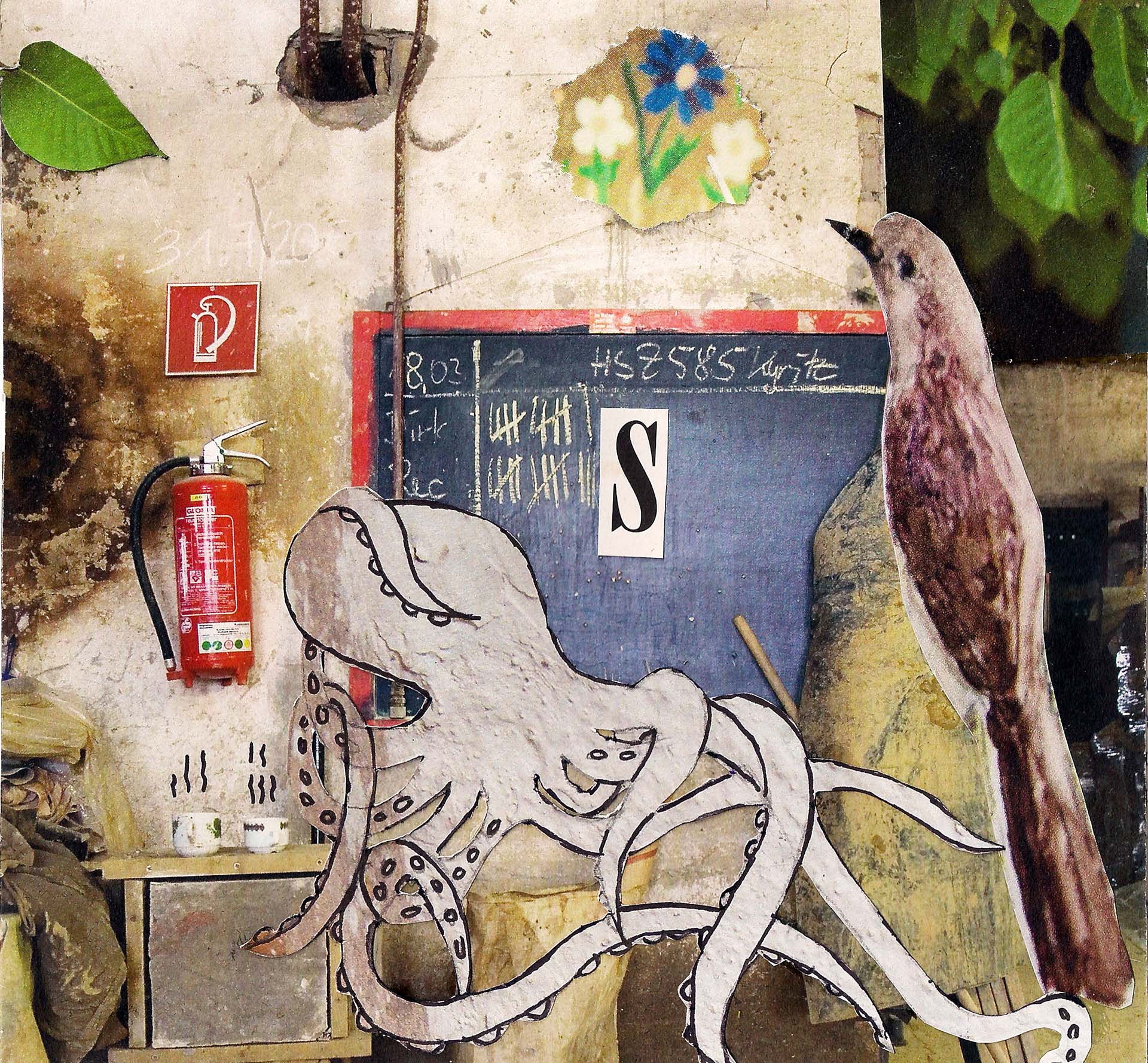 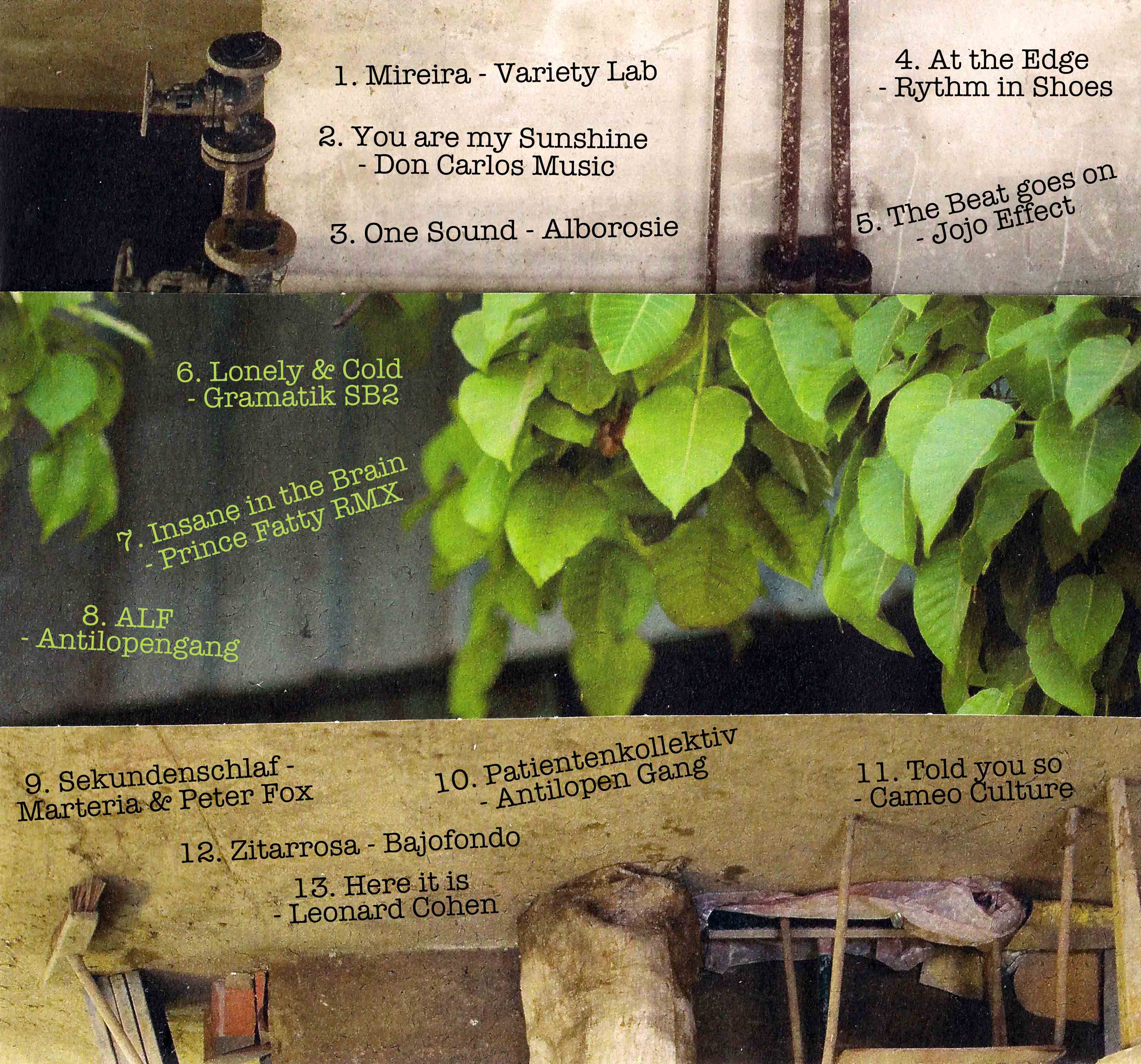 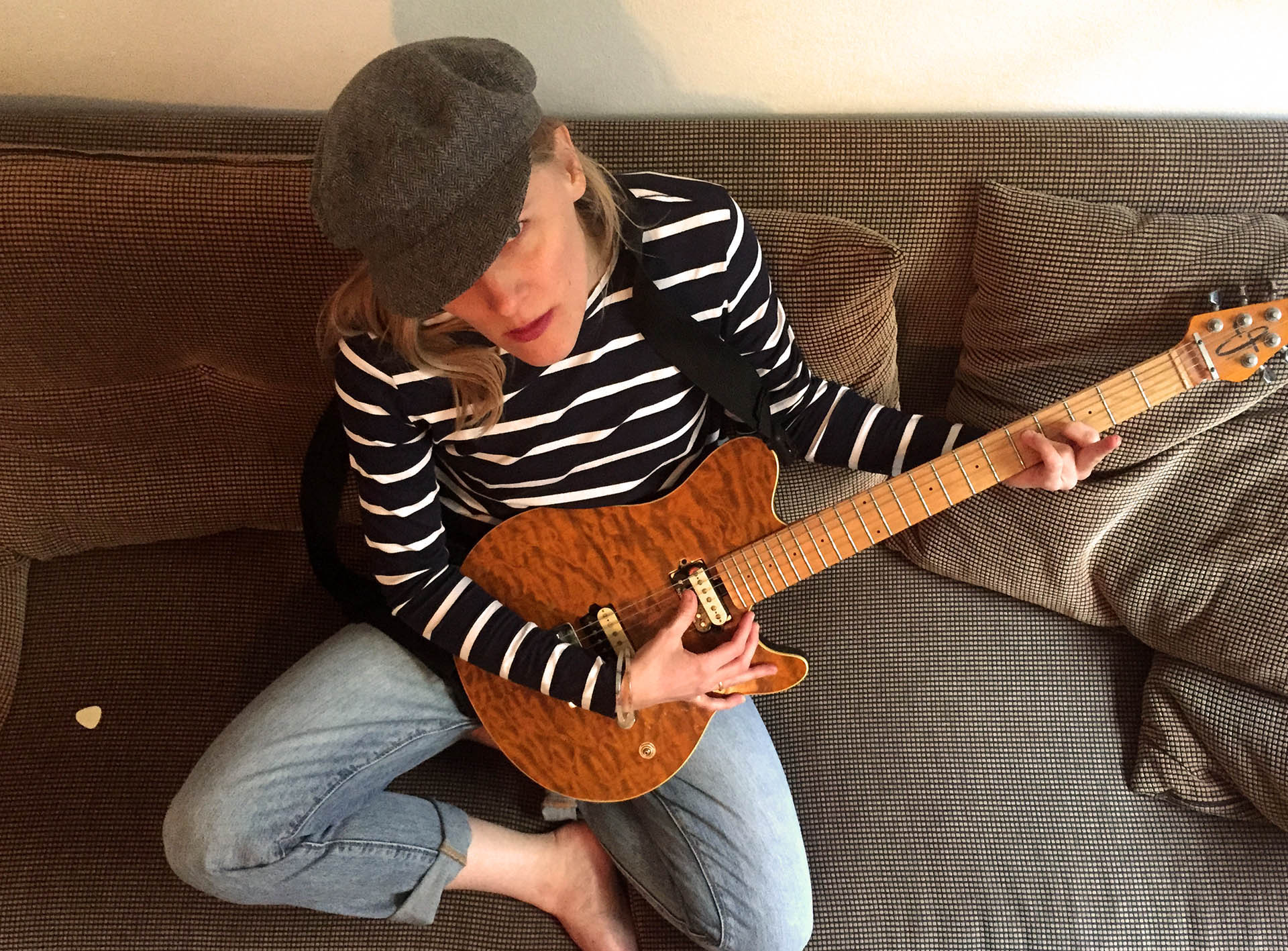 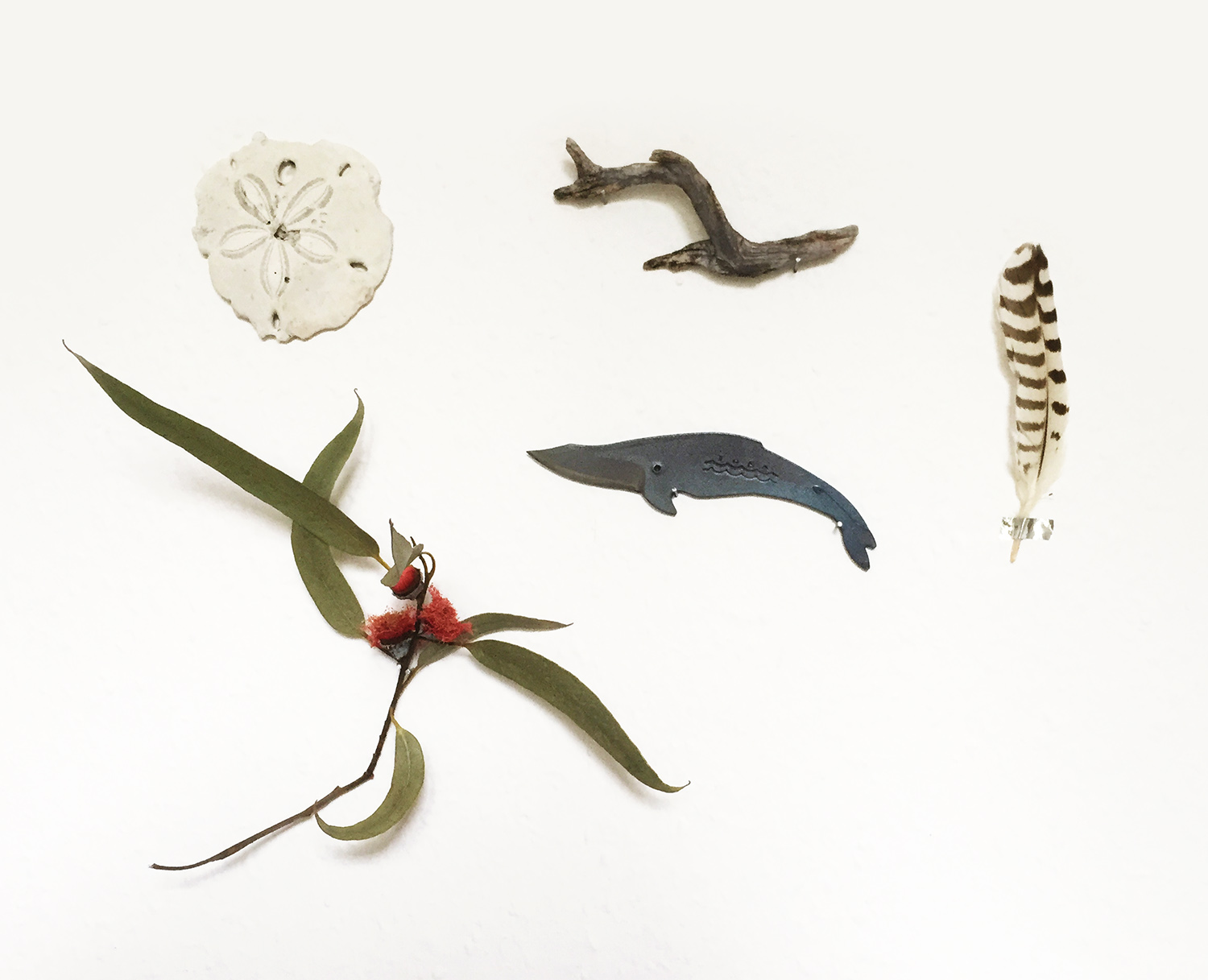 Some nature on the wall collected over the last years: a crab back I found in Ecuador, a driftwood branch also from Ecuador, a feather from the beach of St. Peter Ording, a eucalyptus blossom from the local market and a japanese paper knife shaped like a whale. I love my home growing with our memories. 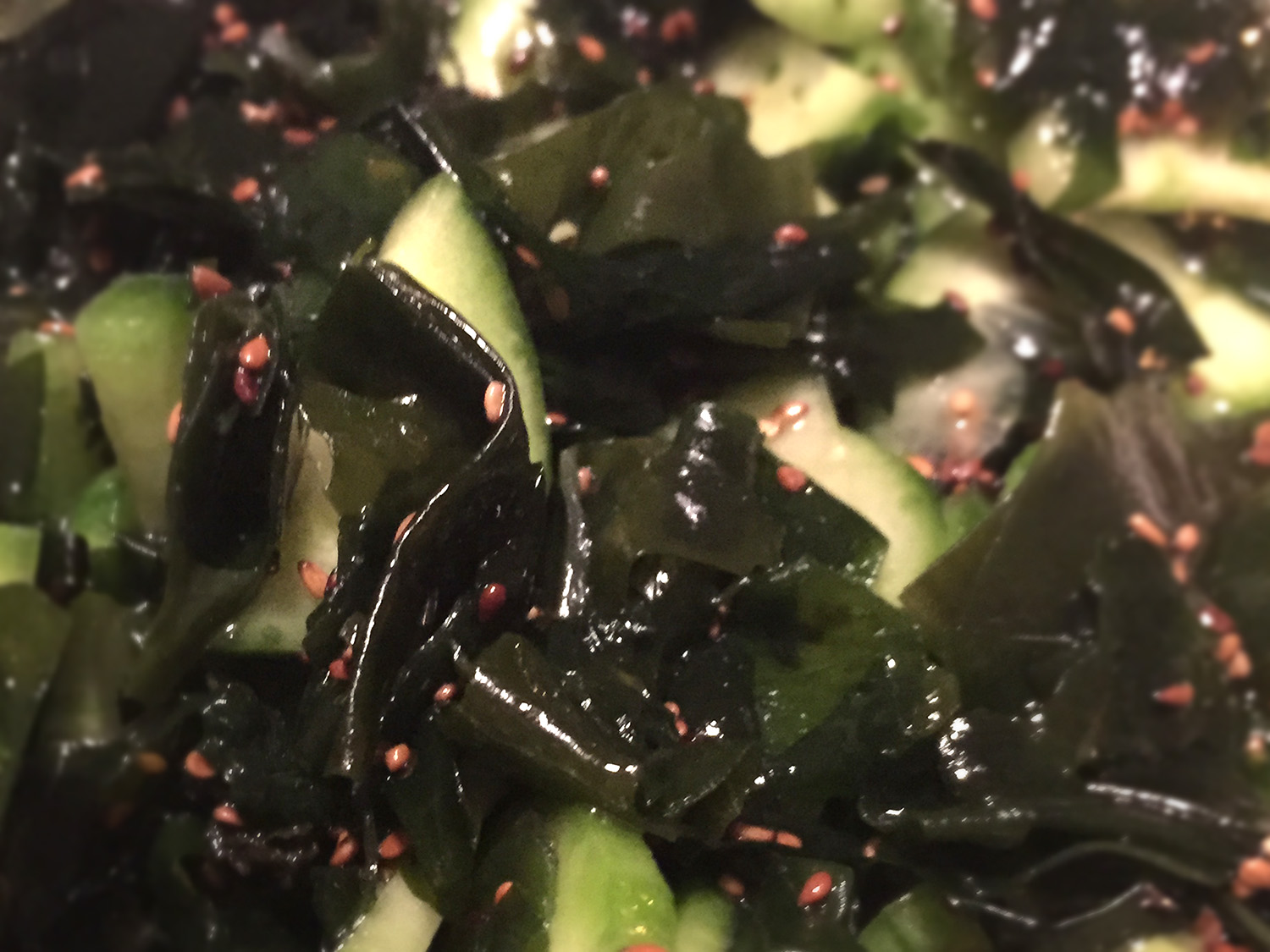 Celebrating Chinese New Year’s with cucumber seaweed salad with roasted sesame seeds from Olafur Eliasson’s cookbook “The Kitchen”. Eaten to fast to take a picture we also had: freshly steamed and fried dumplings (also from Olafur’s cookbook), a miso soup and mochi for dessert. 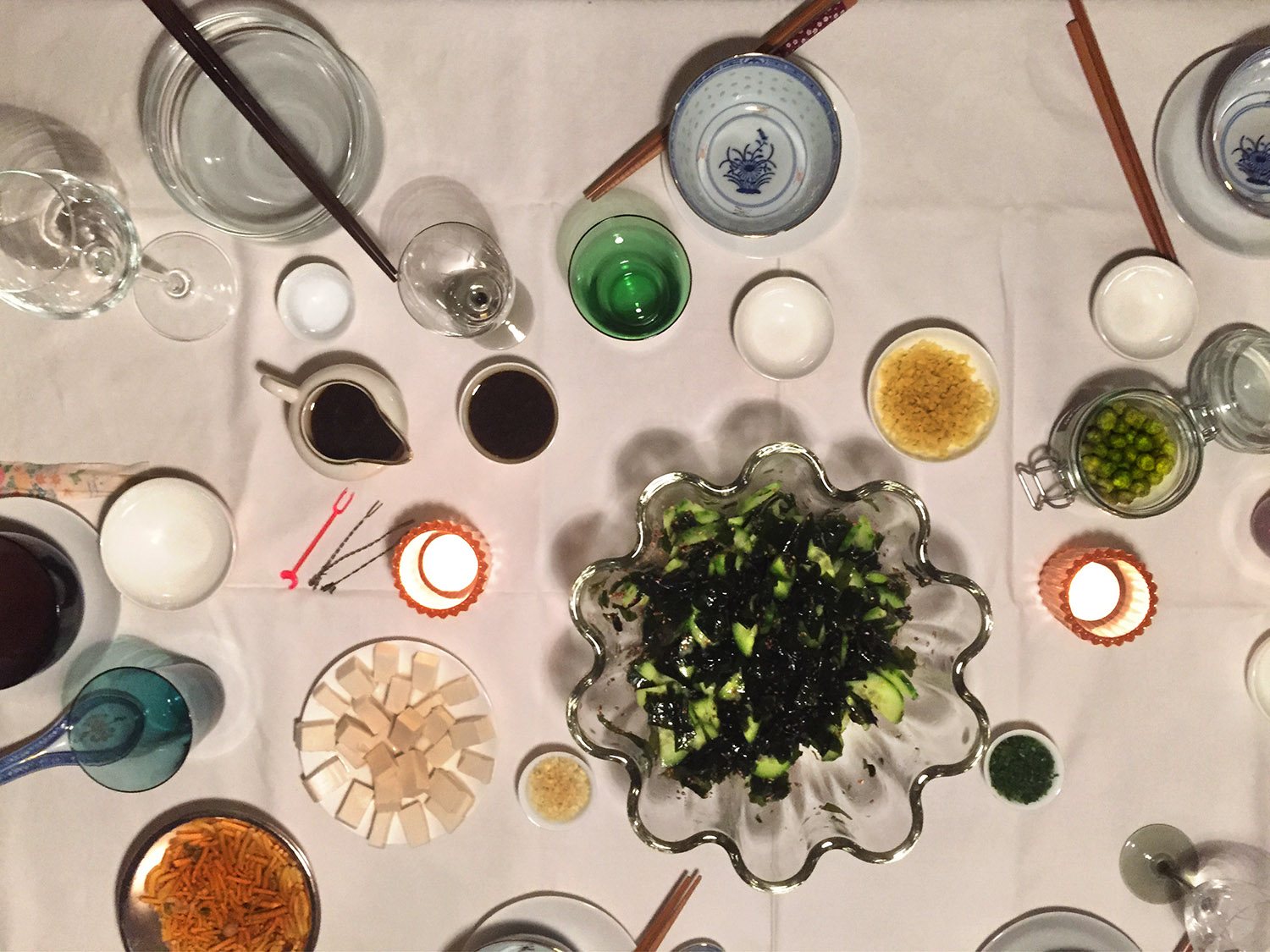 The celebration was in some ways a premiere and also left a mystery. Well, what do I mean? I have never drunken so many different teas on one evening (each tea fitting best to one plate), superfood all around with the seaweed and the jiaogulan tea, a Chinese herbal tea that is meant to make you live forever, and the question: who ate the dumpling that was stuffed with a wasabi nut and was meant to crown the emperor of the night?

Mixtape: Back to Start 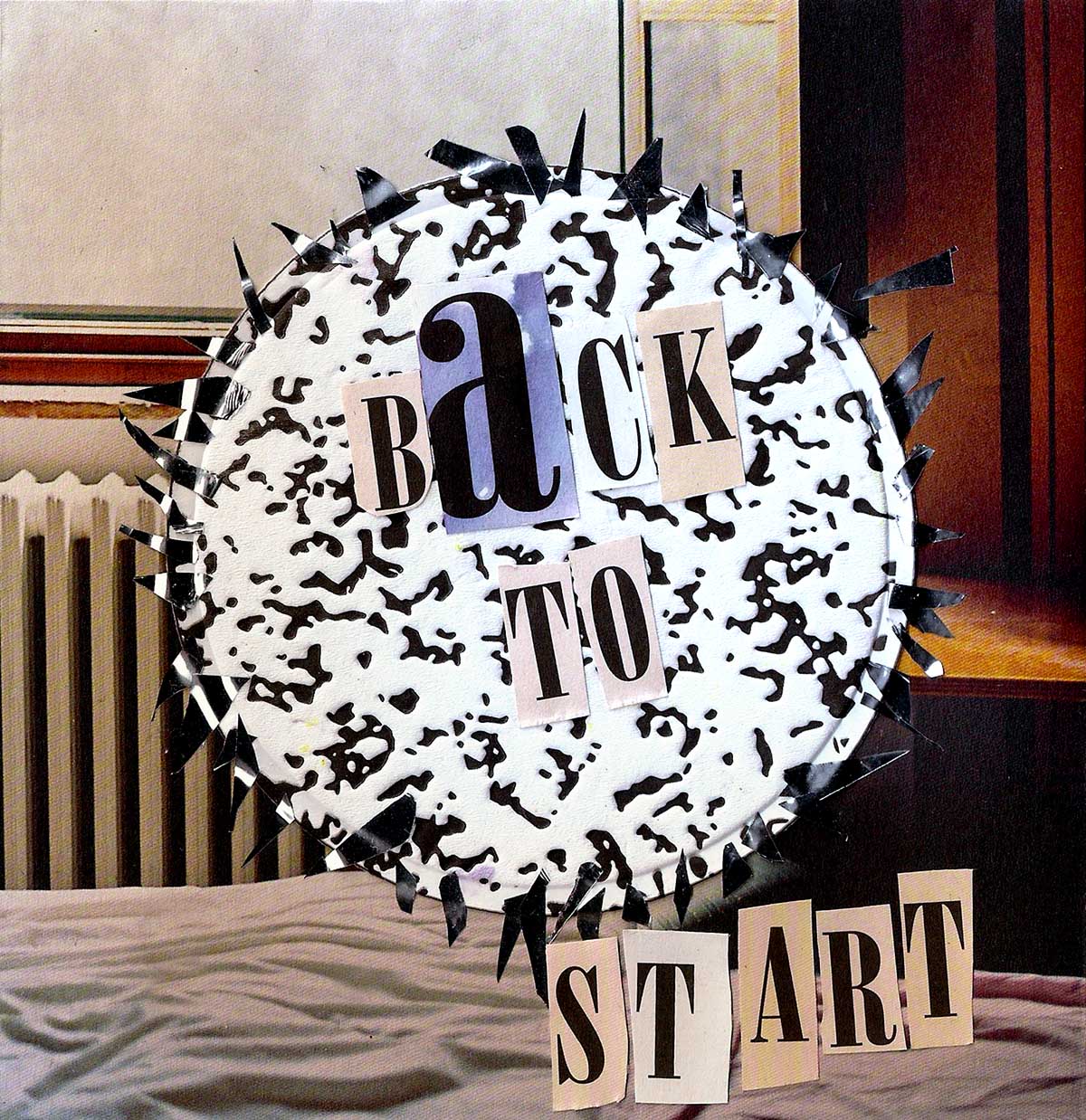 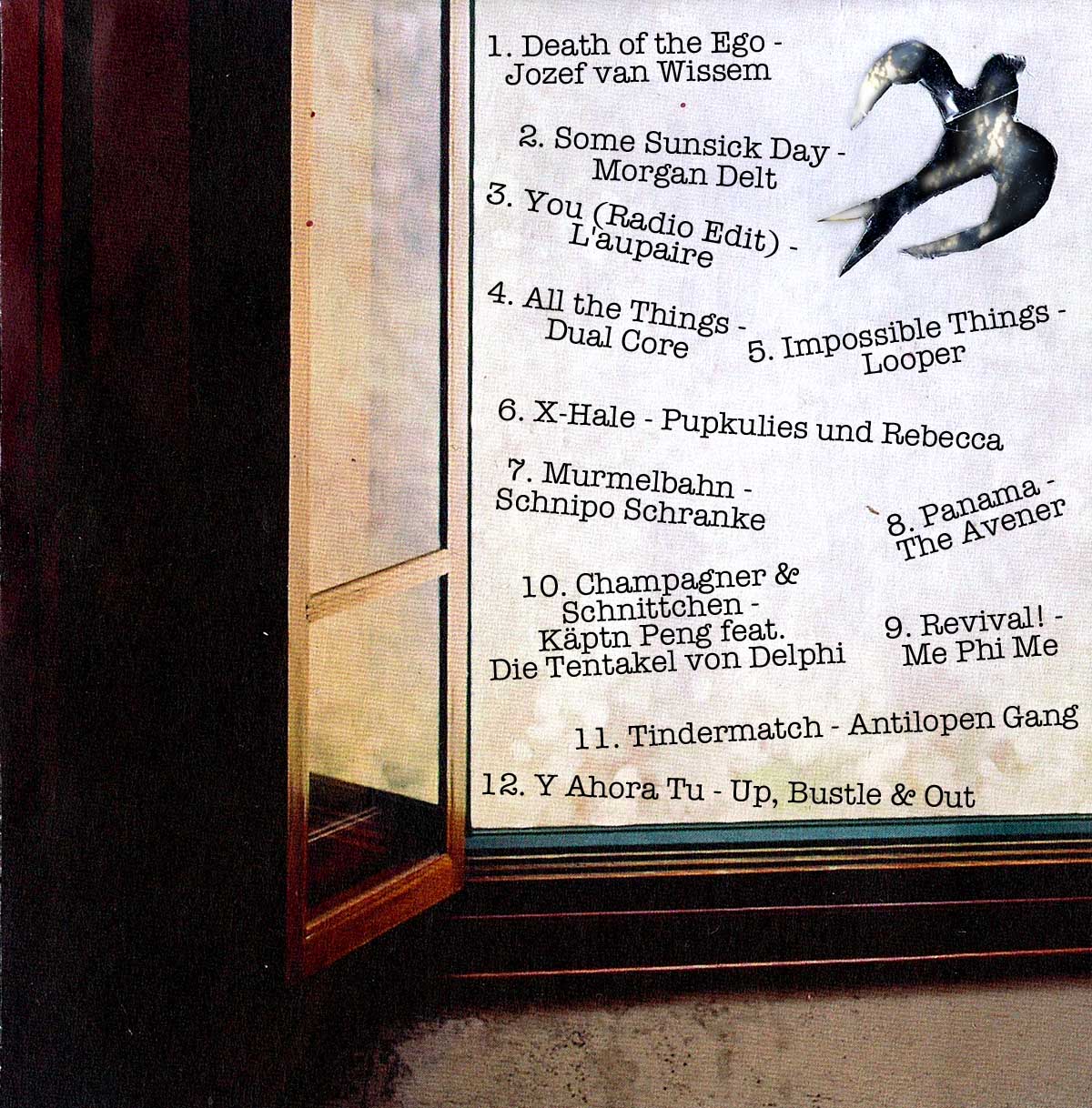 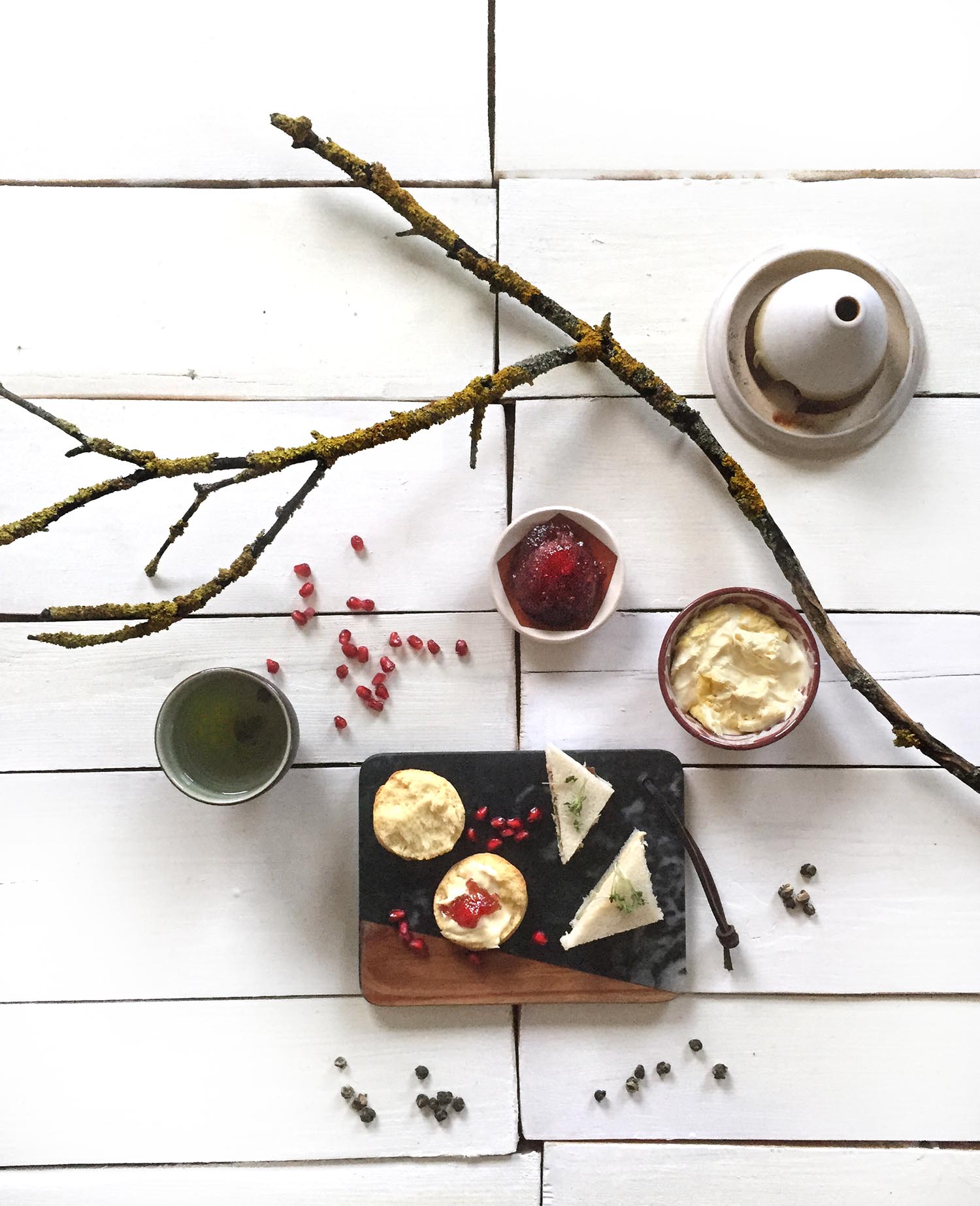 One British tradition I really love is afternoon tea. 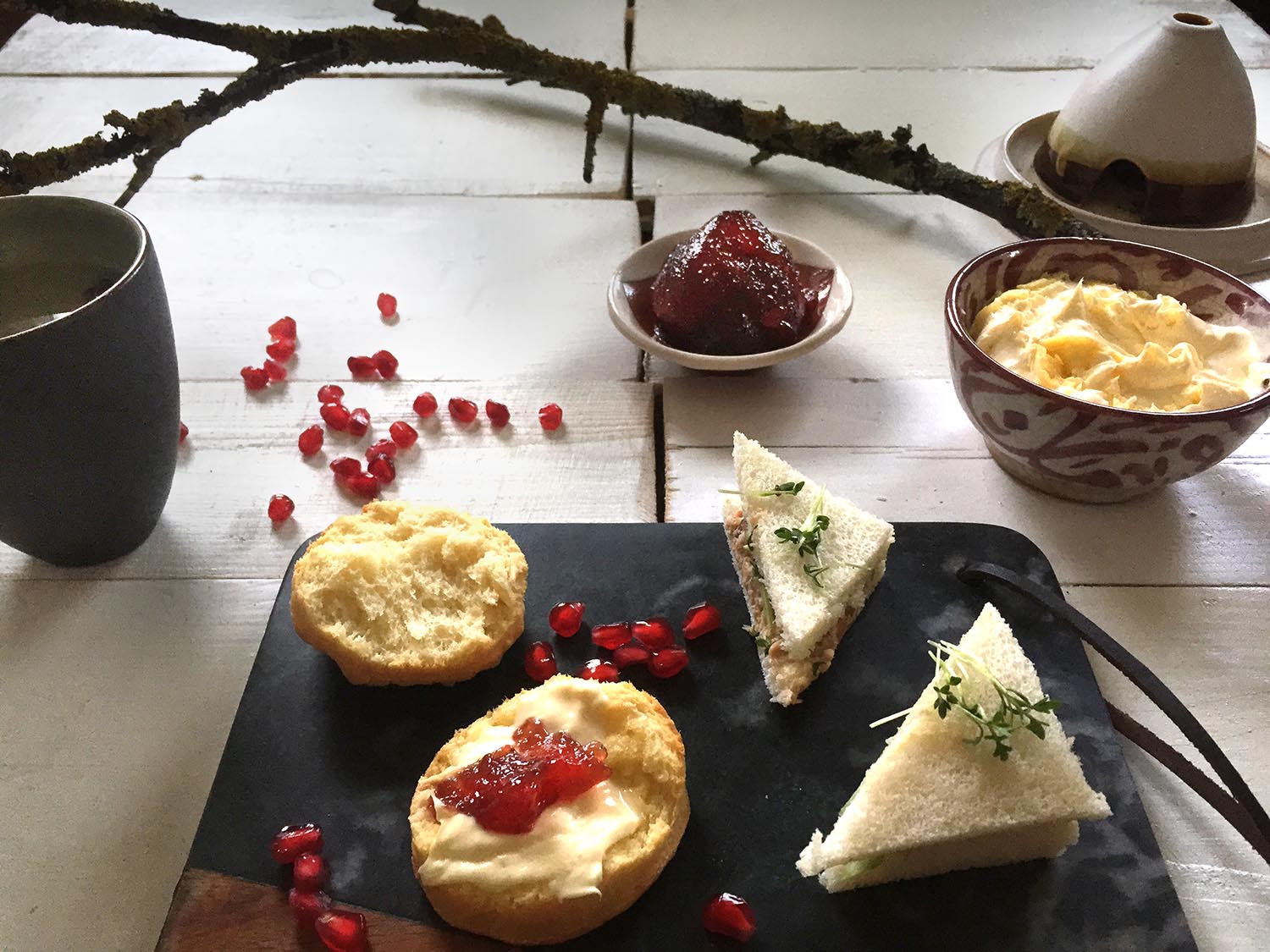 Luckily we have an English teashop here where I can get clotted cream and the jasmin pearls. Visiting The English Tearoom is like diving into another world – keeping everyday stress outside and calming down while sipping on a freshly boiled tea and talking to the lovely owners Lynn and Christian before deciding what to buy.

Preparation:
1. Preheat oven to 200 degrees centigrade (gas 5)
2. Beat one egg, one egg yolk and sugar for two minutes to a foam
3. Combine with salt, butter, milk, flour and baking soda
4. Spread the dough on a flourly surface about two centimetres thick and punch out round scones with a diametre of about five centimetres
5. Put the scones on a tray with baking paper and brush with the remaining egg white
6. Bake for 10 to 15 min. until the scones reached the desired light brown colour.

Serve them freshly out of the oven with clotted cream and jam. 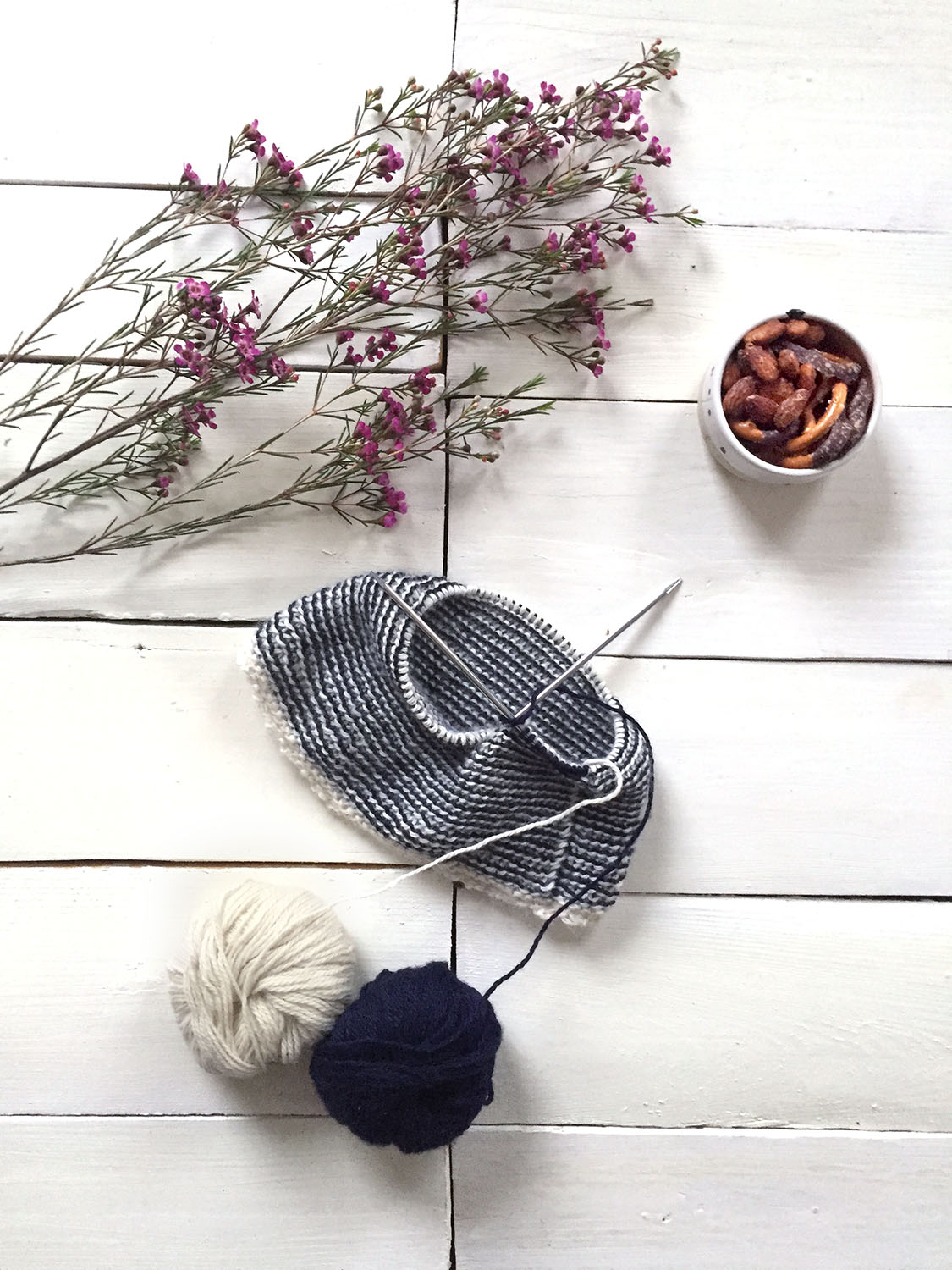 Hardly any market stalls on this Saturday with freezing -12 centigrade outside. But I am proud I made myself go outside to grab some winterly flowers. Back home I continued with my knitting piece. For many knitting a beanie might be routine but for me it is my first creative challenge of the year – my first round circle knitting piece – a beanie for my love. Well, originally it should have been this pattern, but I somehow did it wrong so I go on with my interpretation and hope it will be a beanie in the end (that fits). I chose baby alpaca yarn in creme and marine colour for it. 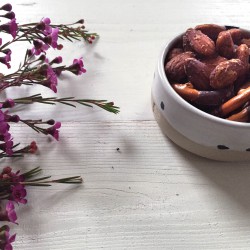 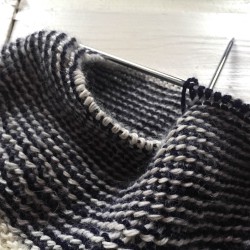 Every once in a while I snack one of those tasty roasted almonds and chocolate prezels out of this cute ceramic bowl. I got both of them from our friends for christmas. I really need to know how they roasted those almonds. 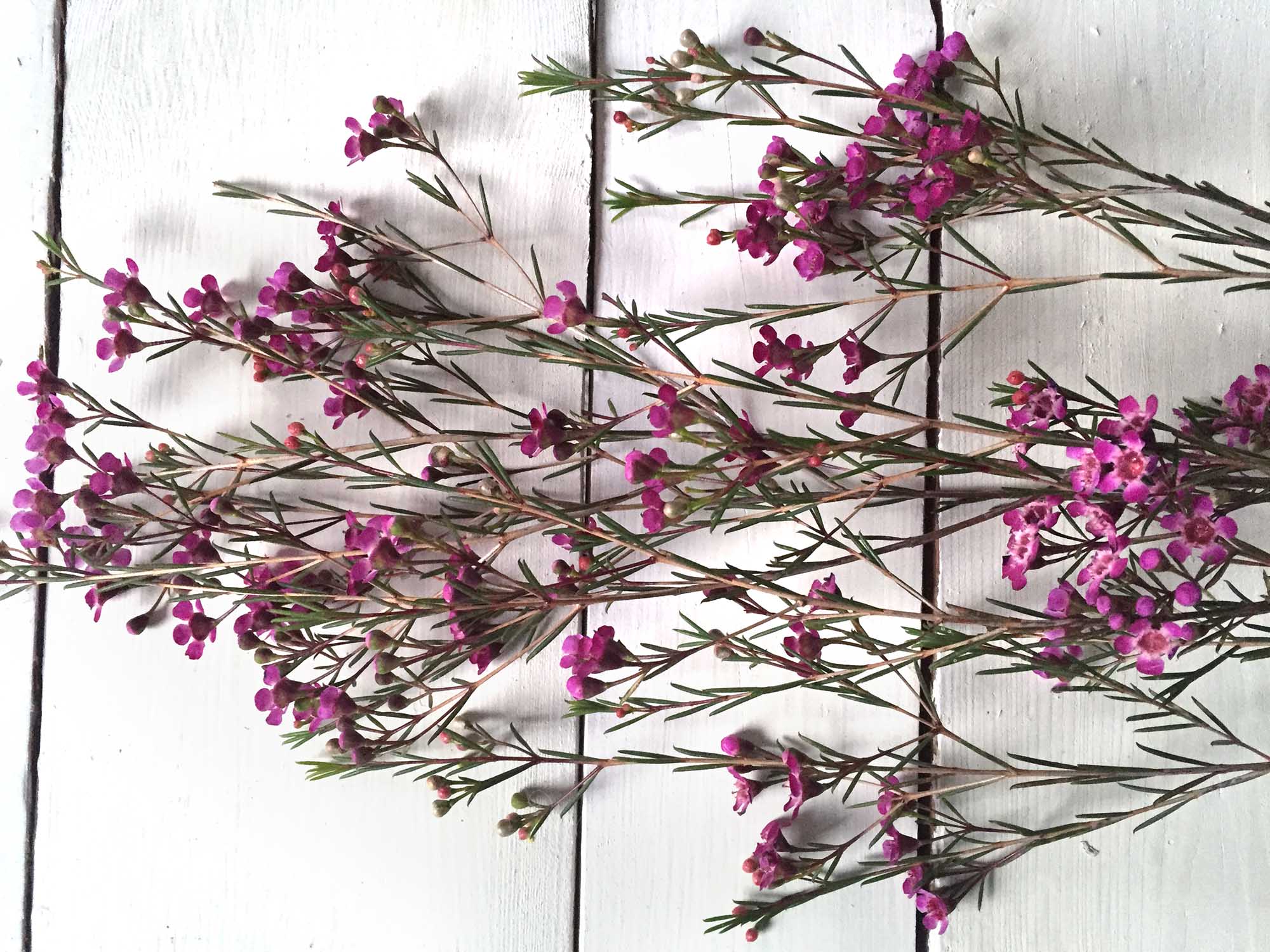 Every time I go to the flower market I find seasonal flowers I haven’t seen before and I fall in love with. I hope those little surprises will never end. 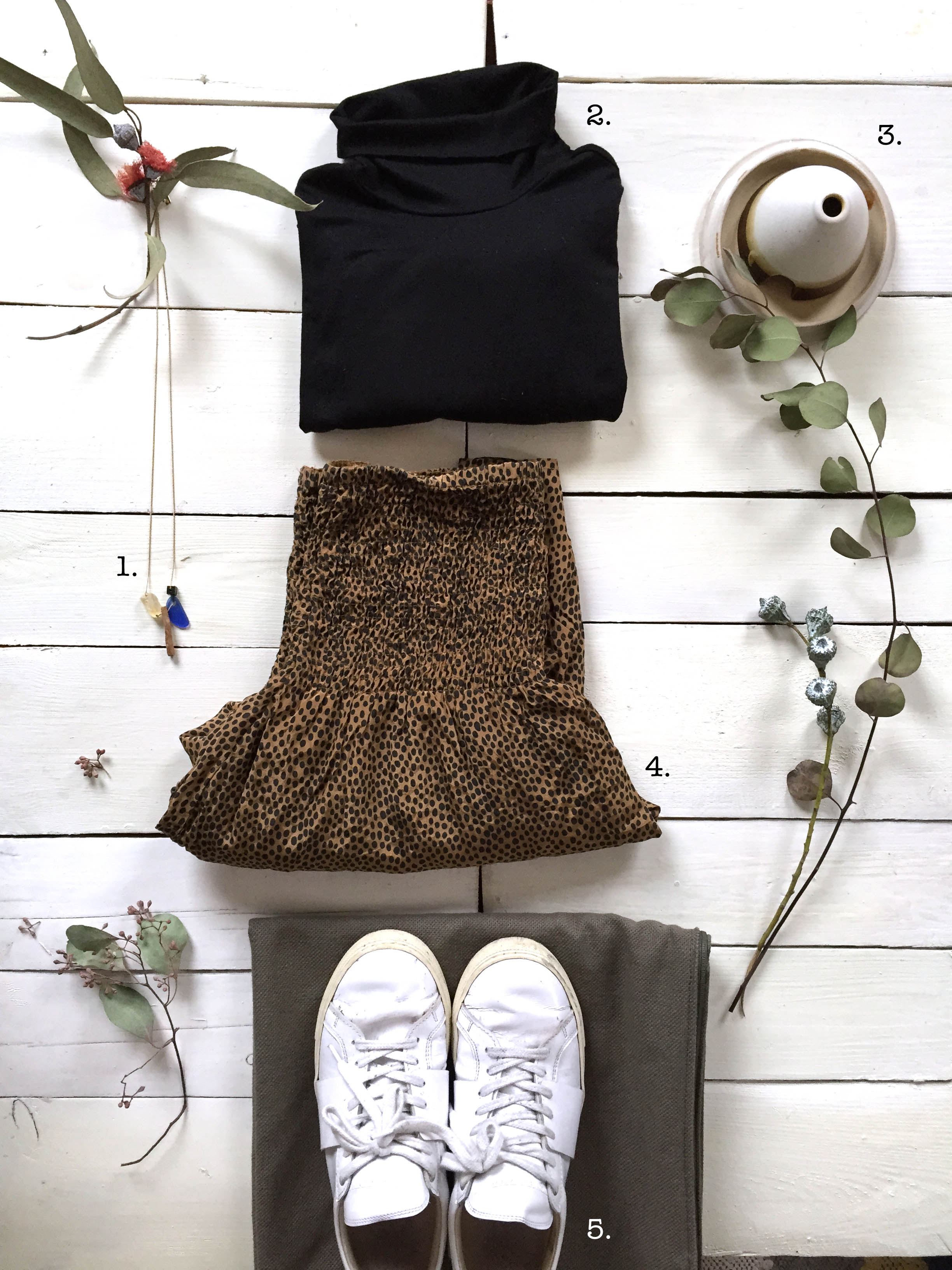 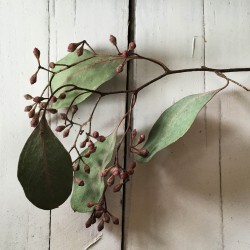 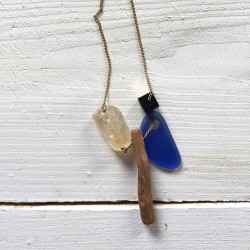 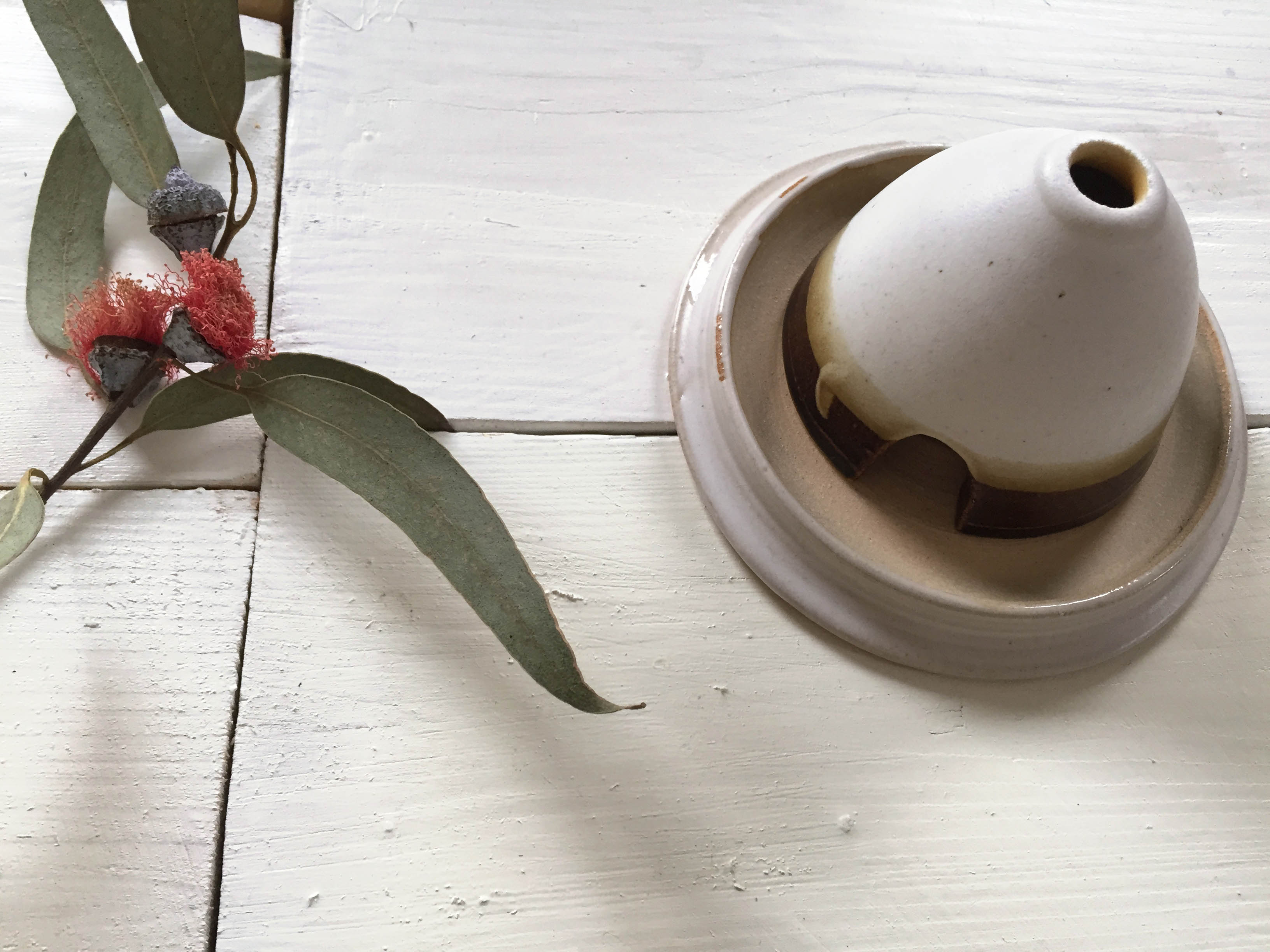 In few hours I am heading off to London to visit my dear friends Medi and Dave for New Year’s. I am so excited and looking forward to some relaxing and inspiring days in bohemian London.

1. Necklace from Isabel Marant that I found at Ave
2. Black hightech turtleneck by UNIQLO
3. Incense hut by Forged & Found. My favourite flavour is pine scent that I buy from our local christmas market.
4. Tacel Skirt with a dotted print by GESTUZ
5. White “Joanne” sneakers by Won Hundred that I bought in February at Hutspot in Amsterdam

Wishing you all the best start for 2017! 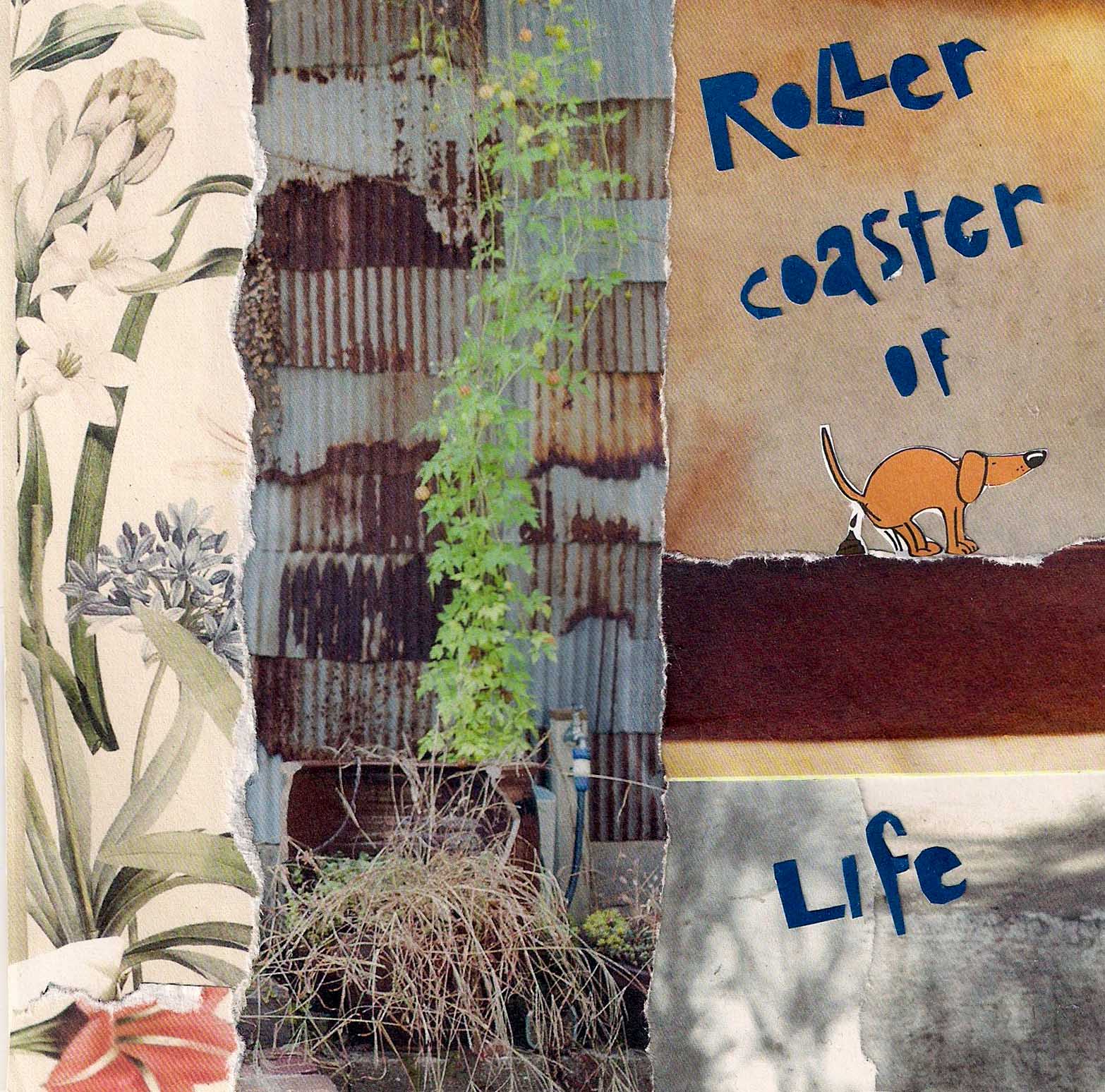 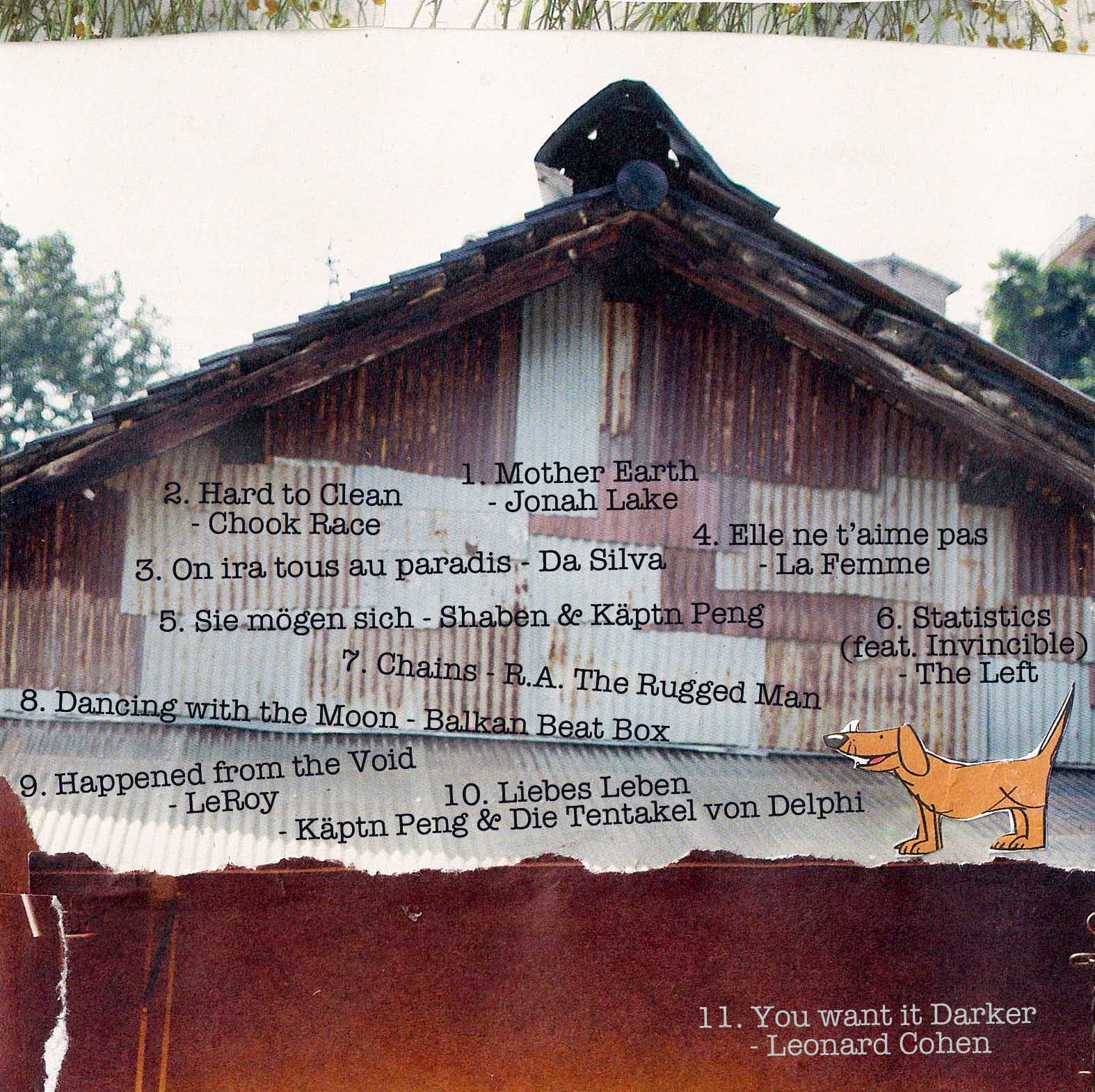 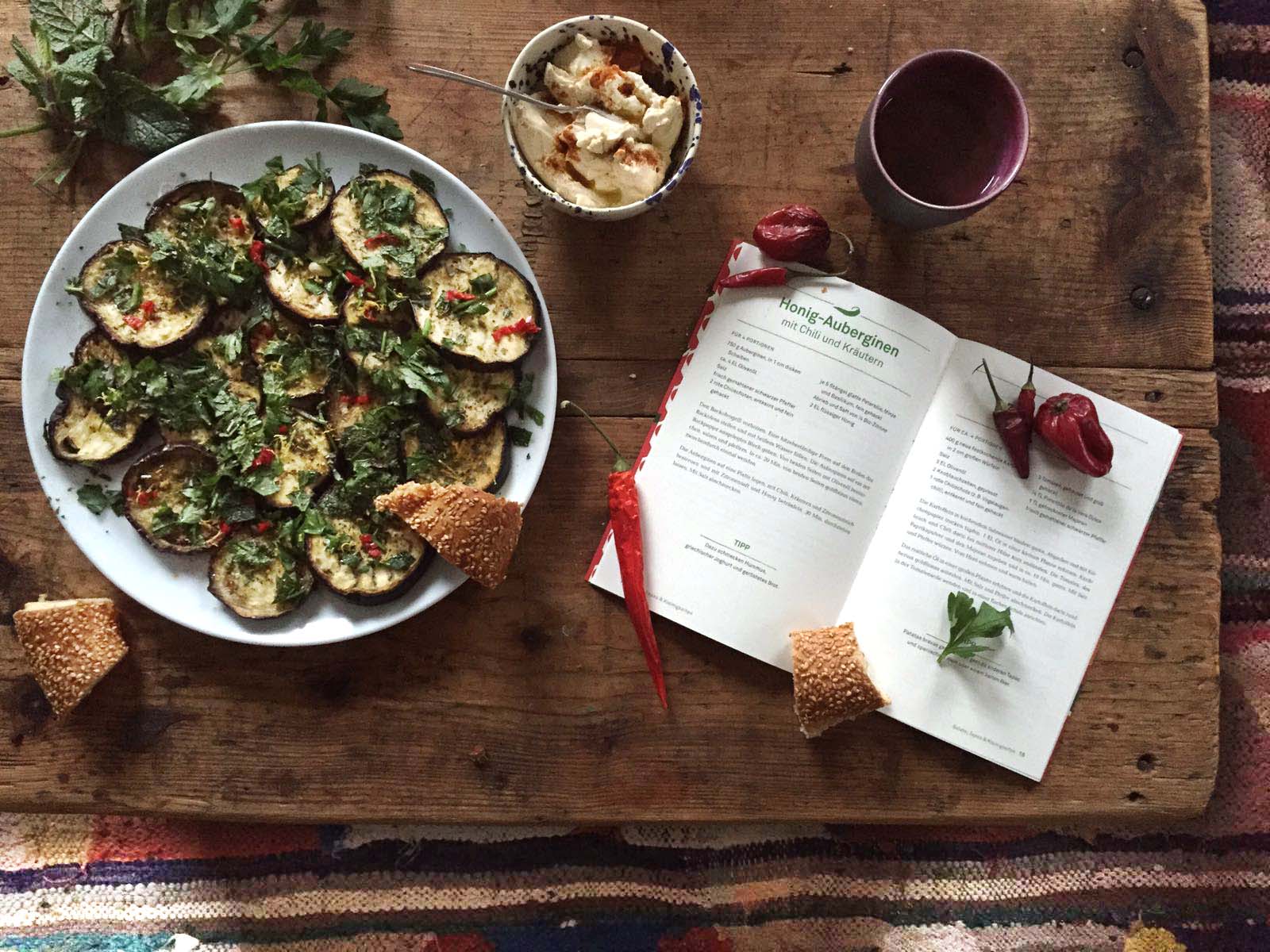 A perfect snack on a weekend, after a long breakfast, before a massive dinner or as a starter…

First recipe I tried from the cookbook “Chili” I got from a friend. Very easy to make but providing new flavours for your tongue…

1. Preheat oven to 180 degrees celsius. Cut the eggplants into one cm thick slices and brush them from both sides with a little bit of olive oil and add pepper and salt. Put the slices on baking paper in the oven. After ten minutes flip them over.
2. In the meantime: Finely chop the herbs, grind the lemon skin and squeeze out the juice.
3. Remove the eggplants from the oven and put them on a plate. Add the lemon juice, honey, lemon skin and herbs equally to all slices. Let it sit for 30 min more to let all the flavours soak into the eggplant.
4. Enjoy the dish with some crusty “Simit” (The Turkish version of a sesame donut) and hummus.

I drank a Turkish apple tea with it… 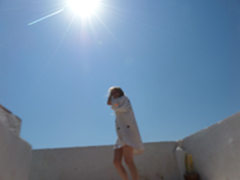 One day a butterfly got lost in the kitchen of Frau G.'s student home: "Metterschling" became her 13th flatmate. He reminds Frau G. of the little smiles that come across your face in daily life when you don't expect them...

All images are copyright by Metterschling. Please don't use without permission.